With the Royal baby bump watch well underway, I promise not to add to the slew of photos commenting on Middleton’s size, shape, diet, etc etc etc becayse, for the record, I think she looks quite fabulous (and healthy) pregnant. To say I was beyond an avid follower of the Royal Wedding a few years back is quite the understatement. My co-author can attest that I dragged her out of bed at 4am EST just to watch the nuptuals live from the east coast of the USA, purple mimosas and all. I’m not generally that enthused when it comes to babies, however the next King/Queen of UK? I can get behind that and all the fabulousness the welcoming of he/she shall bring. To be honest, I’m just looking forward to the adorable photos of Uncle Harry holding the bundle of royal joy.

To celebrate the upcoming birth from the Duke and Duchess of Cambridge, Butter released this week a commemorative nailpolish entitled “Pitter Patter” for the heir-to-be. I’m a fan of purple anything, but this is quite the regal color if I do say so myself. Slightly shimmery, great for any season, and can be stretched for the workplace or an upscale event if you feel so inclined. Anyone else planning on purchasing this color to ring in the birth of Kate & Wills little one?

Editors note: Apparently this color is only available to US markets. Is it that obvious that Americans are the second most excited place out of England for this arrival?

So I assume by now many of you have already seen this photo of female soldiers in North Korea on their patrols in uniform….including high heels. Yes, you read that right. The ladies in the hermit kingdom prefer stillettos rather than combat boots. 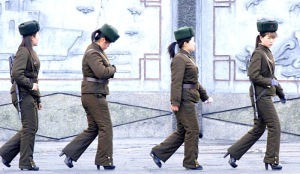 While nothing about North Korea should surprise me anymore (I wrote far too many papers in my academic career about this psych experiment of a state) this did seem a little out of the ordinary. Above all, the regime emphasizes the dedication and effectiveness of their forces. Dedication is these ladies in a nutshell. Personally, I fall on my face half the time when walking in heels, thus the thought of having to parade around them for an entire workday, or better yet, run in them or do military drills if necessary is just terrifying. [Then again, having a government minder send me to a labor camp if I fail to walk properly in high heels is pretty terrifying too, thus I would have probably learned to strut in said shoes if I lived there.]

As much as I would love to say that the heels are an indivdual fashion statement of the lady soldiers, I’m not quite sure they are. Maybe, if anything, a means of assimilating more to the changing times in North Korea? Overall, I see this as one part of the minor women’s reforms accreddited to Ri Sol-ju, Kim Jong Un’s young, hot, popstar wife. For those who don’t follow North Korean politics (and apparently their first lady’s fashion), as much as myself, Ri has made major waves in Pyongyang in recent months for her love of Chanel and Dior. While luxury goods (including but not limited to said designers) are still being banned from North Korea due to their multitudes of human rights abuses, there is stilll good coming of North Korea’s first lady becoming a fashion icon for the country. First of all, the fact that she is even in the spotlight is a major step–she’s essentially the first wife of a modern day DPRK premiere to be really known to the public. (Could YOU name any of Kim Jong-il’s wives off the top of your head?) Ri’s made public appearances, is actually known to the broader North Korean public, and is seen as a positive, smiling icon. She has made it socially acceptable for women in Pyongyang to wear pants (and was even spotted in them herself); hell, the lady was allowed to be photographed riding a rollercoaster! While she’s not known to be the brightest bulb at the First Lady’s club, and she has quite a long way to go from doing the ‘history of the mom dance’ with late night tv talk show hosts, having Ri be a known public figure within her country not only makes this evil empire appear more human and likeable (despite many, many other factors), but shows that there really is a glimmer of hope for girl power in the most horrible and oppressive of places.

Now, I can’t say whether the above soldiers were wearing heels because they wanted to look fabulous or because they were mandated to wear them as part of a (new?) uniform regulation, but the recent changes as a whole in the general dress code for women in North Korea is not just a statement in the fashion world, but in that of the human rights community. Small steps. Will a pantsuit change the world? Nah. But a powerful woman in one just may make enough of an impact.